At CareFlex we want to do our part in shining a spotlight on dementia and challenging the stigma that surrounds the condition. We also want to let you know how we can help you or your loved one towards living well with dementia.

Dementia is not a disease, but an umbrella term for a collection of symptoms that result from damage to the brain caused by different diseases1.

What is Alzheimer’s disease? 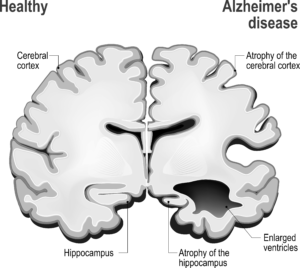 The most common cause of dementia is Alzheimer’s disease with more than 520,000 people in the UK affected,accounting for around 62% of dementia cases2. This figure is set to rise with an aging population and advances in healthcare.

Alzheimer’s disease is thought to be caused by the abnormal build-up of proteins in and around brain cells3. It is a physical disease that manifests as an irreversible brain disorder caused by degeneration of brain tissue and nerve cells4. It is named after Alois Alzheimer, the doctor who first described it.

Alzheimer’s is a progressive disease; sadly this means that gradually, over time, more parts of the brain are damaged. As this happens, more symptoms develop and they also worsen.

Who can be affected by Alzheimer’s disease3?

Although it’s still not known what triggers Alzheimer’s disease, several factors are known to increase the risk of developing the condition.

Age is the single most significant risk factor for developing Alzheimer’s; it mainly affects people over the age of 65 (but it can also develop in younger adults).  A family history of dementia, especially if several family members have been affected and particularly at a young age, can also contribute to the risk of developing Alzheimer’s disease.

One main factor that can be influenced is lifestyle; it is important to lead a healthy lifestyle and ensure that any medical and physical health problems are well managed. Research shows that several lifestyle factors and conditions associated with cardiovascular disease can increase the risk of Alzheimer’s disease, including smoking, obesity, diabetes, high blood pressure, and high cholesterol.

What are the effects of dementia and Alzheimer’s disease?

Dementia can have a devastating effect, not only on the individual diagnosed, but also on families, carers and wider society5. It is always important to consider the needs of the individual and their support network.

What are the sings & symptoms of dementia and Alzheimer’s disease?

Different types of dementia can affect individuals differently, and they will experience symptoms in their own way6; it is important to remember that everyone is unique and no two people will experience the disease in exactly the same way.

However, there are some common early symptoms that may appear some time before a diagnosis of dementia; these include:

For most people with Alzheimer’s, the earliest symptom is memory lapses. In particular, they may have difficulty recalling recent events, faces or names and learning new information.  As Alzheimer’s progresses, problems with memory loss, communication, reasoning and orientation become more severe and more support will be needed day-to-day. In the later stages of the disease someone may become much less aware of what is happening around them. Individuals can become frail and present with difficulty eating or walking. Inevitably, they will need help with all their activities of daily living.

In the later stages of Alzheimer’s disease and especially seen in vascular dementia and dementia with Lewy bodies an individual’s cognitive and physical decline can result in the lack of ability to move effectively, safely and independently. Problems can include:

What postural challenges can result from dementia?

Is there anything that can help individuals affected by dementia?

There is currently no “cure” for the disease but there is a great deal of support available to help individuals and their support network live well with the disease. This includes drug treatments, and care and support from health professionals and other organisations.

Support in your local area can be found here: www.alzheimers.org.uk/dementiaconnect

Please read Michael’s Story to understand the role specialist seating can play in improving quality of life for individuals affected by dementia.

Please do not hesitate to contact us if you require more support or advice around yours or your loved ones’ seating needs.

Use the contact form, call us on 0800 018 6440 or email us now to arrange either a chair demonstration or a free, no obligation seating assessment with one of our expert, local assessors.

Our assessors will be with you all the way from assessment, to chair set up, to ensuring that you are comfortable in your new CareFlex chair.